The illimitable, silent, never-resting thing called Time, rolling, rushing on, swift, silent, like an all embracing ocean-tide, on which we and all the Universe swim like exhalations. [Thomas Carlyle] 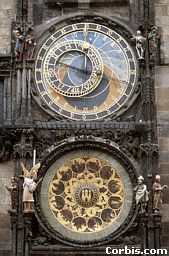 Throughout history, Man has tried to explain the universe: why things occur as they do, how it all began, and how it will end. Ancient people had myths to explain their observations of the universe. Some beliefs were that the sun moved across the sky because Apollo pulled it along behind his chariot, the Earth was created by God in six days, and the whole world rested on the back of a very large turtle. In modern times, science is used to explain the mysteries of the universe. One of the more recent theories is that there are four dimensions: up-down, back-forth, in-out, and time. These four dimensions are known as spacetime.

The phenomenon of gravity is described as a curvature of spacetime. A massive object, such as the sun, would cause spacetime to be curved near it. It has been shown by experiments that light rays passing close to the surface of the sun are curved. When gravity is explained in terms of spacetime, it is no longer a mysterious force, but rather a natural property of four-dimensional geometry.

Time dilation was a concept introduced by Albert Einstein. Time dilation occurs when an object is moving at a high velocity. Time passes more slowly for that object than it does from another frame of reference which is "at rest." Muons moving at high velocities have their internal clocks slowed down, and they have a longer lifetime than what would be expected at slower velocities. To understand the concept of time dilation, one could picture two scientists, one who is at rest relative to the surface of the earth, and one who is on a train moving relative to the surface of the earth. Each scientist has in their possession a light-clock. It consists of two parallel mirrors one meter apart. A photon is reflected back and forth between the mirrors. Since the velocity of light is known to be constant, the light-clocks are accurate. The units of time for these clocks are light-meters: the amount of time it takes a photon to travel from one mirror to the other. Each scientist observes that the photon in their clock moves straight up and down. However, the scientist at rest relative to the earth sees the scientist on the train pass by, and observes that that scientist's photon moves in a zig-zag pattern, not straight up and down. They observe the photon on the train to be travelling a longer distance in a unit of time than their own photon. Using the simple physics equation v = d/t, the scientist on the ground calculates that the clock on the train is running slower than their own clock, although the scientist on the train experiences time passing by the same way in their inertial frame of reference as the scientist on the ground experiences.

Time dilation leads to the concept known as the "twin paradox." In theory, if one twin remained on earth while the other twin travelled through space on a very fast rocket ship, the travelling twin would return to find they were younger than their sibling. This has been tested by placing cesium beam clocks on commercial airplane flights. A cesium beam clock was left at the Naval Observatory for reference, while other cesium beam clocks were sent travelling east and west. It was found that the eastward clock was nanoseconds slow, while the westward clock was nanoseconds fast.

Gravitational redshift occurs because clocks close to a massive object run slower than clocks far from a massive object. If atoms that radiate light are thought of as clocks, the frequency of their light in the presence of gravity will be lowered. Their spectrum will be redshifted.

Questions and Answers (From "Ask the Astronomer," Internet.)

Spacetime and Gravitation by Wojciech Kopczynski and Andrzej Trautman

General Relativity - A Guide to its Consequences for Gravity and Cosmology by J. L. Martin

Introductory Astronomy and Astrophysics by Stephen A. Gregory and Michael Zeilik