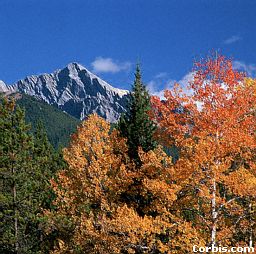 As most scientists agree, global warming is a fact. Now one of the questions is whether vegetation will contribute to or decrease global warming. New evidence shows that warmer temperatures can cause trees to take up more carbon dioxide (CO2), a major greenhouse gas, thus cooling the atmosphere.

As part of the Boreal Ecosystem-Atmosphere Study (BOREAS), Andy Black of the University of British Columbia measured the carbon capture and release by a Saskatchewan aspen forest for four years, using sonic and infrared sensors. The trees used more CO2 for growth in years where a warmer spring caused a longer growing season. As global temperatures rise, the reduction in CO2 could lower temperatures again.

However, the carbon uptake by boreal forests does not solve the global warming problem, according to Black. Canada emits about 600 million tons of CO2 per year, mainly from the combustion of fossil fuels in our cars and factories. That works out to about 20 tons of CO2 per person per year, second only to the United States. Says Black, "Assuming our aspen site is typical of all broad-leaf deciduous forests in Canada . . . they could sequester about 30 percent of the total CO2 emissions in Canada."

Also, not all ecosystems respond the same way to higher spring temperatures. Studies by American scientists Michael Goulden and Walter Oechel reveal that when temperatures rise in a boreal black spruce forest or tundra, the earlier thaw releases more CO2 through respiration. Black believes this is because more carbon, in a deep organic layer, was already present in these soils than in the aspen forest.

Next, Black plans to investigate the carbon uptake and release of nearby black spruce and jack pine forests. This will help scientists understand the overall effect vegetation has on global warming.

Global warming is putting Canada's parks at risk, according to a report released by Environment Canada and Parks Canada. Ecosystems already stressed by fragmentation and exploitation may not be able to cope with the additional burden of climate change.

In Banff National Park, snowfall will increase, making it difficult for deer and elk to find food; low water levels in Point Pelee National Park could cause wetland marshes to dry out; and drought in Prairie parks could increase forest fires. In fact, most of Canada's national parks are threatened by the rapid climate changes our world will face in the near future, the report says.

The David Suzuki foundation is asking the Canadian government to work towards curbing global warming -- and soon. Says Suzuki, "If we do nothing to reduce the greenhouse gas emissions causing global warming, we won't just lose plants and animals to extinction, we will lose our children's heritage."