Braids and Meanders, Riffles and Pools 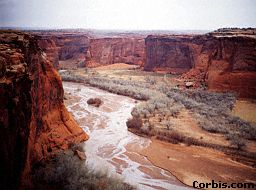 At channel confluences in braided rivers, there is deep scour, and this material is deposited in bars downstream.  This is significant to braided river morphology and mechanics.  Ashmore et al. (1992) wished to measure downstream and cross-stream flows at channel confluences in braided rivers.   In cross-stream flows, or secondary circulation, there are two cells with the flow going down towards the bed in the centre of the channel and circulating back towards the bank.  In simple Y-plan confluences with flows of similar magnitude, the cells of secondary circulation converge and then gradually decrease downstream.  This is probably because of decreasing depth, increasing radius of curvature, and increasing distance from the flow separation zone at the entrance to the confluence.  The authors also found that there is either no or little flow separation downstream of confluence corners.

In addition to braiding, channels can have a meandering form.  Usually, meandering occurs in sediment-load channels.  However, Carson (1986) studied high-energy meandering gravel rivers of the Cantebury Plains in New Zealand.  He found that there are high short-term rates of bend migration and there are overwidened point bars.  Models of the formation of meanders involve secondary circulation in the cross-section deflecting sediment to the inside of the bend, building up the point bars.  However, it is observed in nature that this deflection of sediment only occurs in the downchannel tail.  Carson found that the point-bar surface is built up by flow divergence.  When water flows toward the outer bank, the converged flow scours that bank.  Downstream, where the flow diverges, gravel is deposited along the downvalley bank, and the water is forced to flow toward the upvalley side of the channel.  This inflection, in a different location than in suspended-load channels, leads to the upvalley migration of the meanders. 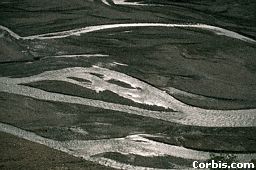 Hickin (1978) studied another meandering river, the Squamish River in British Columbia.  He found that there were very low downstream velocity gradients and irregular profiles.  The low gradients were because of intense mixing by the many eddies.  In the profiles, there was a general tendency for the flow velocity to decrease from the water surface to the boundary.  Hickin also found that there was a correlation between the channel planform and the shear stress and flow resistance.  At the channel bends, there was relatively high shear stress and flow resistance and the opposite was true at inflection points.  There was a decreased intensity of spiral flow with an increase in channel bend curvature.  He also found that flow depth increases and relative roughness decreases in the channel bends.   However, there is a net decrease in resistance of the flow because of energy dissipation through secondary circulation and an increased shear rate.  Hickin found that the strength of secondary circulation increased as the ratio of channel curvature to channel width decreased.  The maximum velocity will then shift from the concave to the convex bank, causing high shear stresses over the point bar which prevents further deposition, and a decrease in shear stresses on the concave bank which decreases the rate of erosion.  Also, during near-bankfull discharge, deposition occurs in the separation zone at the concave bank of a very tightly curved bend.  This can stop or reverse channel migration.

In addition to having a meandering shape, rivers have bedforms within then, such as riffles and pools.  Milne (1982) studied 80 bends in rivers in Britain, to find characteristic bend spacings, frequency of riffles and pools in bends, and variation in bed forms.  In the past, there was disagreement whether sinuous and changing rivers had their bed form spacings remain the same when more bed forms were added with an increase in sinuosity, or whether the bed forms elongated with the expansion of bend-arcs.  Milne found that in bend-arcs there was a single riffle-pool sequence, or elongated bed forms, or more than one riffle-pool sequence.   This was related to the length of the bend-arc, although the frequencies of bed forms in different bends were unpredictable.  The bed forms and bends tended to be spaced at four to six widths.  The variability in bed from spacings that Milne found could have been caused by:  heterogeneity of sediment on the floodplain; flow affected by upstream bends; patterns of channel confinement; or variation in the valley slope, transversely or longitudinally.  Milne also found that increased curvature tended to increase the bed form width. 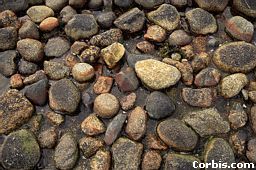 Wohl et al. also studied riffles and pools, in rivers in northern California.  They found that relative pool depth and relative distance between pools increased as channel gradient decreased.  Where there were high channel gradients, there were resistant channel boundaries, coarse material, and low discharge and stream power per unit area.  The reaches with low gradients had opposite characteristics.  Because of these characteristics, where there are high gradients, the flows use more of their energy to overcome boundary and internal resistance, so there is less energy for scouring of the bed and for formation of pools.   Low gradient reaches experience the opposite.  The authors also found that riffles were associated with places where mass movement deposits entered the channel, and this association was stronger upstream.  In the upper reaches, pools were formed where the resistant bedrock outcrops caused the creation of eddies which scoured the bed.   In the middle and lower reaches, pools were formed where there was flow convergence off of a bar and an obstruction was present, creating eddies, and this was often at a channel bend.  However, pools were not always formed at these locations.

Milne, J. A.  1980.  Bed forms and bend-arc spacings of some coarse-bedload channels in upland Britain.  Earth Surface Processes and Landforms, 7:227-240.