The debate continues about whether York should become affiliated with the Canadian Memorial Chiropractic College (CMCC.) While York's senate has already approved the affiliation in principle, some are concerned about the scientific uncertainty of chiropractic treatments. While the beliefs and practices of chiropractors vary, some chiropractors believe that the cause of most diseases is pinched nerves, which they can cure by readjustment of the vertebrae. Consequently, they do not believe that immunization is necessary. Some claim that chiropractic manipulations can help patients suffering from athsma, upset stomachs, colic, and headaches, although there is no scientific evidence of this. Even the effectiveness of chiropractic treatments on lower back pain is questionable. In a study of people with back pain, researchers found no statistically significant difference between the results of chiropractic treatment, physical therapy, and no treatment. In addition, most people with acute back pain recover within a month, without any treatment.

Sometimes, chiropractic treatment can even be dangerous. In 1998, a 20-year-old Saskatchewan woman went to see her chiropractor about neck pain. The chiropractor performed a neck adjustment, which ruptured an artery. The woman died of a stroke because of this. Although strokes caused by chiropractic adjustments are estimated at one in a million, a survey in Britain suggested that twelve percent of patients had negative reactions to cervical manipulations, that is, manipulations of vertebrae in the neck region. 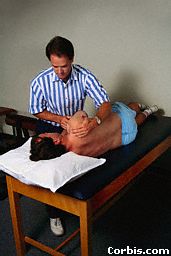 Despite the questions surrounding chiropractic practices, chiropractors gain credibility by being associated with institutions of higher learning, in this case a university. As an example, an aspiring massage therapist returned from college a few years ago, and told her family of the new things her teachers had taught her. She learned that lines of energy flow through the human body, so that manipulation of one location will affect another location in the body, such as in acupuncture. There is no scientific evidence of this, yet since she learned it in college, she never questioned its validity. The same may be true of chiropractic beliefs: with the association of chiropractors with a university, people are less likely to question their unfounded claims, such as pinched nerves in the vertebrae being the cause of most disease.

The one advantage to an association of a chiropractic college with a university may be the exposure of the chiropractors to scientific ways of thinking. Chiropractic students will take courses in the Faculty of Pure and Applied Science, and they should also have to take a course in scientific method. Then, they can decide which of their practices are scientific, and which are pseudoscientific.

York is potentially the first university affiliated with a chiropractic college in Canada. They must therefore proceed with caution, carefully considering their affiliation with the CMCC. They must consider not only their own reputation, but the wider effect on society. The public may not question a profession that is associated with a university, although there is no evidence that chiropractic treatment is effective. York's administrators need to remember that their decision will have effects that reach far beyond the campus.