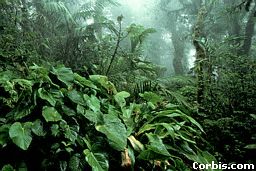 One of the most important functions of cloud forests is their hydrologic role. They collect water that would not have otherwise been available by capturing water from the clouds. They reduce erosion because of the high infiltration capacity of their soils (Hamilton et al., 1994.) Also, because the epiphytes absorb water and the vegetation has a low evapotranspiration loss, the cloud forests can store much water (Bruijnzeel and Proctor, 1994.) During the wet season, there is much precipitation. The cloud forests can store this water, minimizing flash floods and landslides. During the dry season, the forests release the water to lower elevations. This water is then available for power generation, irrigation, or for drinking water (Penafiel, 1994.) Cloud forests are also important in areas that do not receive much rainfall, since they can provide water that would not have been available otherwise.

In the past, humans did not pose a threat to cloud forests. The forests generally occurred in remote areas, and the steep slopes and cloud cover were unsuitable conditions for agriculture. Now, in many places the rate of loss of cloud forests is greater than that of tropical rain forests. This is because there are increasing population pressures and degradation of the land in other places, and people are being forced onto more unsuitable agricultural land, such as cloud forests. They are clearing cloud forests for agriculture, even though this can result in severe erosion of the steep slopes (Hamilton et al., 1994.) The forests are also cleared for cattle ranching, and the pastures will usually not revert to secondary forest because of the continued grazing pressure (Cavelier, 1994.) Another threat agriculture poses to cloud forests is fire. Farmers at lower elevations might burn their pastures to accelerate the regrowth of grass, and many of these fires spread to the cloud forests (Falkenberg and Voltolini, 1994.) Commercial agriculture also poses a threat to cloud forests. In Malaysia, modern technology, such as pesticides and fertilizers, was introduced, and cloud forests were cleared to grow temperate crops (Kitayama, 1994.) In the Philippines, three quarters of the cloud forest on Mount Data have been cleared to grow temperate vegetable crops for commercial operations (Penafiel, 1994.) Cloud forests are also cleared for drug cultivation, such as cultivation of the opium poppy (Hamilton et al., 1994.) In Micronesia, people use the roots of the Sakau plant, which have a mild narcotic effect, for ceremonies and recreation. Cloud forests are cleared to grow this plant because it requires the high organic matter content found in cloud forest soils and because the remote location protects the plant from theft (Raynor, 1994.)

Although forest clearance for agriculture poses the greatest threat to cloud forests, there are other threats. Global problems that may harm cloud forests are climate change and deterioration of air quality. With global warming, temperatures are increasing. One effect this may have is to increase the frequency and severity of hurricanes, which could be devastating to cloud forests (Hamilton et al., 1994.) Changes in rainfall and humidity, such as droughts associated with El Nino events, could be devastating to cloud forests. They require specific conditions, with the epiphytes relying on atmospheric moisture (Loope and Giambelluca, 1998.) Cloud forests are also more sensitive than other ecosystems to atmospheric pollution, since they capture water, and pollutants, directly from the clouds (Benzing, 1998.)

There have been efforts to preserve cloud forests, with varying degrees of success. One example is Pohnpei in Micronesia. There, the village chiefs were involved in creating the management strategy for the local cloud forest. There was community-based management, and the local community wanted to preserve the cloud forests for their own benefit. This preservation effort was successful because the local communities were involved (Raynor, 1994.) Another example is La Tigra National Park in Honduras. This cloud forest provides cheap, clean water to a nearby major city. It also protects the city from flooding. In places such as this, the government could pipe water to nearby communities, and this would be an incentive to conservation (Richards, 1996.) If the local communities see a direct effect of preserving the cloud forests, they will be more likely to make the effort to do so.

An example of ecotourism in a cloud forest is the Rwenzori Mountains in Uganda. In 1992, there were fifteen hundred visitors to this forest. The number of visitors is not limited since the organization in charge is more concerned with profit than conservation. The visitors used the same path, which became degraded over time. Also, money from the tourism was supposed to go toward local social welfare projects but did not. To properly manage this cloud forest, they need to limit the number of visitors, maintain the trails, and spread the effect of tourists over a wider area by creating more trails (Lush, 1994.) A more successful example of ecotourism is the Monteverde Cloud Forest Preserve in Costa Rica. Entrance fees are lower for students and locals than for foreign tourists, so that the Preserve does not exclude local residents. Profits from tourism in a small part of the forest covers the maintenance costs of all 10,000 hectares, so the operation is self-sufficient. Although they receive donations, they also provide educational programs, so this evens out. In fact, in 1993, there was a net revenue of $68,813. Also, there is a limit of 100 people on the trails at once, and if the trails become degraded, they are closed and repaired right away. However, this Preserve may be unique since they get cheap labor in exchange for providing room and board to visitors, and since the area was settled by Americans in the 1950's (Aylward et al., 1996.) The examples of Rwenzori and Monteverde show that ecotourism can either be harmful or beneficial to cloud forests, depending on the situation and how it is managed.

One step toward preserving cloud forests is to raise awareness at the local, government, and international levels. Although cloud forests are not as famous as their rain forest neighbours, in many places they are being lost at a greater rate (Hamilton et al., 1994.) Also, for example, in Samoa the school curriculum includes ecological issues. However, there is not information about the local environment, so that the children are not taught the importance of preserving their local ecosystems (Whistler, 1994.)

Although cloud forests are naturally fragmented, since they occur on islands and mountains, fragmentation needs to be reduced within areas of cloud forest. Also, connections between reserves in continuous mountain ranges need to be maintained (Brown, 1994.) Managers need to have a plan that anticipates problems, involves the local community, and considers local demographic information, since population pressure poses the greatest threat to cloud forests (Hamilton et al., 1994.) Managers also need to fence and patrol cloud forest boundaries, since although the government may protect an area with legislation, they may not protect it in practice. For example, Sao Joaquim National Park has no fixed boundaries and is unprotected. People live inside the park, and their populations and the rate of deforestation are increasing (Falkenberg and Voltolini, 1994.) In addition, managers need to make the land surrounding the preserves sustainable, since this will reduce pressure from local farmers to expand into the cloud forest (Hamilton et al., 1994.)

Cloud forests serve many important roles, including providing water and reducing erosion. Their loss could have devestating effects both to nature and to humans. The biggest threat to cloud forests is the same as in most tropical areas: populations are increasing, and land use is not sustainable in many places. In order to protect cloud forests, and other areas in the tropics, researchers need to address these fundamental issues.

Bruijnzeel, L. A. and E. J. Veneklaas. 1998. Climatic conditions and tropical montane forest productivity: the fog has not lifted yet. Ecology, 79:3-7.

Related books for sale at Amazon.com: