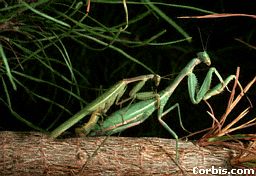 "Wait a minute," you say. "What kind of sick, perverted, cannibalistic sex life is that?" Well, it's actually quite natural . . . for a praying mantis.

Ah, yes, the sex life of a praying mantis. While the male is having sex with the female, she will often turn around and bite his head off. This does not stop him, though: he will continue to copulate with the female, even while his brain is being digested by her gastric juices. You might wonder why the male even bothers. However, his genes will live on in a whole new generation, the embryos growing with nourishment from their father's body. This avoids the whole "deadbeat dad" issue that plagues many other insects and humans.

Some insects, such as the male hangingflies, practice "safe sex." To avoid being eaten by the female, they present her with insects to snack on during sex. Some wrap the meal in silken threads so they can inseminate the female before she is finished eating. Some even give the female an empty package: by the time she chews through and discovers it is empty, the male is nowhere to be seen.

Although that may seem like a dirty trick, females of the Photinus genus of fireflies play an even nastier trick. Fireflies attract a mate by flashing a signal that is specific to their species. However, the female Photinus flashes the signals of other species. The males will land, thinking they will mate with a female of their own species. They realize too late that they have become Photinus food. 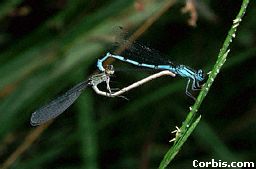 Insects have to worry about more than being eaten. They also have to make sure that their sperm, not another male's, fertilize the female's eggs. Most female insects store sperm in a storage pouch called the spermatheca, and the eggs are fertilized later. To make sure their sperm fertilize the eggs, many male damselflies have a structure to scoop out the previous male's sperm from the female's spermatheca. Male migratory locusts plug the spermatheca opening so other males cannot deposit their sperm. Some male butterflies even coat the female's genitalia with a substance that hardens, preventing her from mating with other males. Male bed bugs avoid the issue altogether. They pierce the female's abdomen and inject sperm into her blood, sort of like taking a shortcut to her eggs. 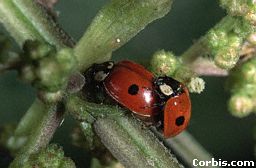 Some insects are well-endowed by human standards. The female mayflies have two genital openings, and the males have two penises. Others have a marathon endurance that humans can only envy. For example, one species of walkingstick may copulate for as long as 79 days!

So, the next time you are lying in bed, wondering what is going on in the next room, wonder instead what the cockroaches in the kitchen are up to . . .

Insects Through the Seasons by Gilbert Waldbauer