Summary of Microtox Toxicity Test Systems - Where They Stand Today

(Summary of article by:  Ansar A. Qureshi, Anthony A. Bulich, and Don L. Isenberg) 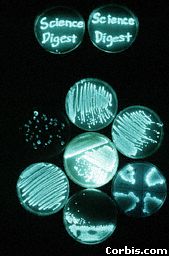 The Microtox procedure involves placing about 10^8 bacteria in suspension in a vial, then using a photometer to measure the light emitted by this control.  Dilutions of the sample substances are then added to vials of bacteria, and measurements are made at certain intervals of time of the light output of these bacteria.  The standard time is fifteen minutes.  The measurements of the light output are then adjusted with changes in the control, as light outputs change naturally over time.  Endpoints such as the EC50, which is the concentration of a sample that causes a 50% decrease in the light emitted by the bacteria, are determined by graphing the log of the sample concentration versus the percent light decrease.  This is usually done using a computer program.

The Microtox system can be used to test wastewater, sewage, runoff water, water from lakes or rivers, complex industrial effluents, pharmaceutical and cosmetic products, pesticides, industrial inorganic and organic chemicals, and soils and sediments.  It can be used to test liquids or solids.   It is used for purposes such as water quality monitoring, soil testing, site surveys, and environmental impact and risk assessment studies.  It can also be used to study the toxicity of a combination of substances.

The Microtox system is used all over the world, and there is much information available on it.  The procedures have been standardized, and are readily available.  This one test can be used for many different applications, such as assessing the toxicity of environmental samples, pure compounds and complex effluents, and the results obtained are quantitative.  The Microtox system gives reliable results, with coefficients of variation between 10% and 20%:  In a study by the Canadian Petroleum Association, the maximum coefficient of variation for the Microtox system was 31%, while the maximum for fish bioassays was 98%.  The Microtox system was found to have the same or higher sensitivity range as other toxicity bioassays, such as minnow, daphnid, and rainbow trout bioassays.  More sensitive endpoints can be selected with the Microtox system.  Statistically, the Microtox system gives better results because the response of a large number of organisms, about one million bacteria, is measured.  The Microtox system is fast, and results can be obtained in less than two hours.  Other advantages of the Microtox system are that it does not take up much laboratory space and does not require skilled workers; it is economical; it only requires 2.0 ml of sample; the bacteria are easy to obtain and store; and a variety of solid and liquid samples can be tested, including turbid and colored substances.   The Microtox system can also be used to predict the results of other bioassays and chemical tests, and can be used as an early warning system (EWS), detecting toxins in an aquatic environment.

One disadvantage of the Microtox system is that some investigators found it to be too sensitive, while others found it to not be sensitive enough, although most found it to have the right amount of sensitivity.  It is more sensitive to some organic chemicals that can easily cross the cell walls of the bacteria.   It is less sensitive to metals because of salt present in the medium.  Another disadvantage of the Microtox system is that it gives quantitative results when sometimes it only needs to be known whether a sample is toxic or not toxic, not specifically how toxic.  There can also be inconsistencies in results with different temperatures, improper handling of the bacteria, inaccurate dilutions, different exposure times, and other human errors in following the procedure.

Overall, the Microtox system seems to be a good method of determining the toxicity of a substance.  It seems to have very few disadvantages and many advantages.  It can be used for a variety of applications, and is relatively quick, easy, and cheap.  A greater number of organisms can be used in the test since bacteria are used, as compared to fish, which take up much more space.  A larger sample size is preferred for statistical reasons.  Since this test is widely used, there is more information available on it, and results between different studies can be compared.  The Microtox system seems like a good choice for measuring the toxicity of samples.