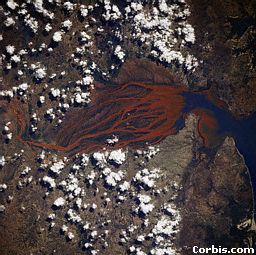 Glacial meltwater streams tend to have a high suspended sediment concentration (SSC).  This is because glacial abrasion and channel migration increase the amount of available sediment, and because there is high intensity turbulence in the flow to transport this material.  The SSC is monitored by measurements of turbidity, but these measurements are at discrete intervals.  Clifford et al. (1995) measured turbidity in a glacial meltwater stream in Switzerland over different time scales:  seasonally, diurnally, and short-term.  They wished to see how well the discrete measurements of turbidity reflected the SSC variations over the different time scales.

Clifford et al. found that the season could be divided into different periods, with different SSCs.  Period one was from late May to early June.  It had a low and invariant discharge, as well as low sediment concentrations.  Period two was in mid-June.  The SSC was relatively stable, but there was a gradual increase in discharge and in the amplitude of the diurnal discharge cycle.  Period three, mid-June to mid-July, had increasing SSC and an increasing amplitude of the diurnal discharge cycle.  Period four, in late July, had a high SSC.   Period five had a maximum SSC.  Seasonally, the SSC depends on discharge, and the diurnal amplitude of SSC increases with increasing discharge.

In the diurnal cycle, the SSC changes with changing discharge.  The discharge increases as more melting occurs with increasing solar radiation throughout the day.  There are changes over time in the importance of the supply and transport controls.  Within the diurnal cycle, there are pulse-like variations in turbidity over several minutes.  These are associated with depressions in velocity.  On a short-term scale, there are pulses of SSC around ten seconds long.   These appear to be "packets" of sediment lifted from nearby and floated past the sensors.

Point measurements are usually assumed to represent the average SSC.  However, these measurements may not be reliable where coarser material, which is not well mixed, is transported in suspension.

Drake et al. (1988) also studied sediment, but in Duck Creek in Wyoming.  They used motion pictures to study the motion of individual and groups of bedload particles.  In their study, they found that there were two groups of particles:  active and inactive.  The active ones were in less stable positions on the bed surface, so they tended to be entrained.  Drake et al. defined four stages in particle motion.  The first stage is entrainment, which is the transition from repose to displacement.  This should not be confused with erosion, which is the net removal of particles:  entrainment involves some particles moving into an area, and some moving out.  Particles could be entrained in three ways:  rollover, the tipping and overturning of particles in repose; liftoff, the direct ascent of the particles on the bed into the flow without significant rolling; and impact ejection, rarely observed, which is when moving particles strike the bed surface and displace other particles.  The next stage of particle motion is displacement, which is when the particles are being carried by the water.  In saltation, the particles are moving horizontally greater than two particle diameters between bed contacts; in rolling, the particles are moving less than two particle diameters between bed contacts; and in sliding, one part of the particle remains in continuous contact with the bed during motion.  The third stage of particle motion is distrainment, defined as the absence of net horizontal motion for a quarter of a second or longer following displacement.  This should not be confused with deposition, which is the net addition of particles to a certain location.  If the particles were being displaced by saltating or sliding, they impacted an object and settled on the bed.   If the particles were being displaced by rolling, they gradually decelerated.   The fourth stage of particle motion is repose, which is the stage where particles spend most of their time.  Particles in repose often rocked or vibrated before being entrained.

Although film can record much information about particle movement, analyzing the film by digitizing the particle positions takes a long time.  Researchers need to develop computer hardware and software to analyze the film.

In Komar's (1987) sediment study, he reanalyzed data involving the entrainment of particles from a bed of mixed sizes and densities.  The standard curves of threshold entrainment of particles are based on studies of particles of similar sizes and densities.  The larger the stress exerted by the stream on the bed, the larger the maximum-size particle will be that is entrained and transported by the stream.  However, natural conditions involve a mix of particles.  Komar found that in a mixed bed, coarser particles were entrained at lower flow stresses than in a bed of uniform particle size.  This is because in a mixed bed the larger particles project higher into the flow.  Also, they have higher pivoting angles when they rest on smaller particles, and can therefore be entrained more easily.  He also found that finer particles required higher flow stresses for entrainment than in a bed of uniform particle size.  This is because smaller particles are sheltered by larger ones, and they have larger pivoting angles, making it harder for them to be entrained.  There are clearly differences between threshold curves obtained from studies of uniform particles and from mixed particles, and this should be kept in mind by researchers.   The selective entrainment from a mixed bed is important for various processes.

The sediment study by Kostaschuck and Ilersich (1995) involved dune formation in the Fraser River Estuary in British Columbia.  They found that the dune migration rate was weakly correlated with the flow velocity, and the data showed hysteresis effects.  These effects occur over a short period of time, when variations in velocity are controlled by the tides, and seasonally, when the variations in velocity are controlled by river discharge.  These variations are explained by the creation and destruction of bedforms, driven by sediment transport.  The bedforms respond to changes in flow velocity by changing their size.  Their rate of response is inversely related to bedform size and directly related to current speed.

The authors also found that most sediment transported in the Fraser River Estuary was transported in suspension.  Many studies use geometry and migration rates of dunes to estimate the bed-material transport rates, but this is not applicable in rivers such as the Fraser River, where most of the transport is in suspension.  When the transport is in suspension,  there is no flow separation and there is a low angle on the lee-side slope.  This is because the sediment from suspension fills in the lee-side separation zone, instead of bed load avalanching down the lee side.  Clearly, if scientists make assumptions about the geometry of dunes and transport rates, they should take into account the method of transport, namely the transport of sediment as bed load or suspension. 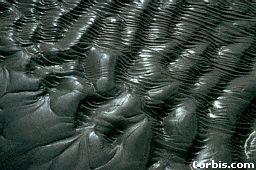 Finally, Reid and Frostick (1987) examined the variability of the reaction of bedload to water flow.  Scientists want a universal bedload equation, but find that each river reacts differently.  This is because stream beds are not a uniform arrangement of particles.  Reid and Frostick found that pebble clusters and other bed microforms had an effect on entrainment of particles.   Single particles were generally entrained before those in clusters.  They also found that there were differences in the traction thresholds at the beginning and end of sediment motion.  In addition, bedload transport occurred in pulses.  These pulses could be caused by the pebble clusters suddenly breaking apart, and all the particles being entrained at the same time.  Clearly, natural stream beds are not completely uniform, and this affects the reaction of the particles to the water flow.   A universal bedload equation would have to take this into consideration.